What is Visible Light Communication(VLC)?

Ⅰ. The Background of VLC

With the growth of the Internet of Things and the rapid development of artificial intelligence, humanity is headed towards an intelligent era characterized by "all-pervasive perception, all-pervasive connectedness, and all-pervasive intelligence." The large volume of data generated in the intelligent age places increasing demands on communication systems' high speed and low latency, putting traditional communication access network technology to the test. Visible light communication (VLC) is a novel method of communication that was designated one of Time Magazine's top 50 scientific and technological inventions in the world in 2011.

In terms of dependability, power consumption, and luminous energy efficiency, LEDs have exceeded incandescent bulbs, and the importance of lighting has expanded dramatically.

The idea of employing light as a transmission channel, on the other hand, is not new. It dates back to 1792 in France when signal lights mounted on towers allowed for light-based communication between cities.

The "Heliograph," which employed mirrors to reflect sunlight by interrupting light or spinning the mirror, was invented by the US military at the turn of the nineteenth century.

Alexander Graham Bell (the telephone's inventor) invented the photoelectric phone in 1880, which sends voice signals through a beam of visible light.

The visible light 430-790THz of the 380-750nm range is used in modern VLC systems. Communication can be formed without relying on radio frequency technology by altering the light of existing lamps.

VLC systems usually use the visible part of the spectrum

The huge expansion in mobile data using radiofrequency in the modern world has resulted in an extremely congested spectrum, which can cause interference. VLC is typically utilized inside, where the most significant source of interference—high-intensity light sources such as the sun—doesn't exist. Visible light is also an unlicensed transmission frequency band, which means there's no need to apply for a license and it's not affected by neighbouring systems using the same frequency range.

From a safety standpoint, radio frequency waves can easily penetrate walls, allowing the signal to be intercepted, and long-term exposure to radio frequency waves at high power levels may be detrimental to human health. No additional power amplifiers or signal chains are required in VLC systems with low transmission speeds, such as indoor positioning, lowering system power consumption and design complexity.

So, what exactly does visible light communication entail? It is to allow the LED to send and receive signals while maintaining the LED illumination function. To put it another way, that's the same as putting a WIFI router into an LED light. Doesn't this seem like something out of a science fiction novel? This type of integrated thinking can be seen in many areas, such as when a camera is stuffed into a phone or a computer is stuffed into an iPad (bushi). It's just that it can't be named WIFI at the moment, but LIFI, because the wireless W has been replaced with a light L, and the frequency of the electromagnetic wave has been altered from GHz (1 000 000 000) to THz (1 000 000 000 000).

The graphic below depicts a hypothetical future scenario. People are smiling as they use laptops, and a beam of light from above hits the laptops. This lamp is remarkable in that it not only brightens the space but also serves as a router for the notebook's network. 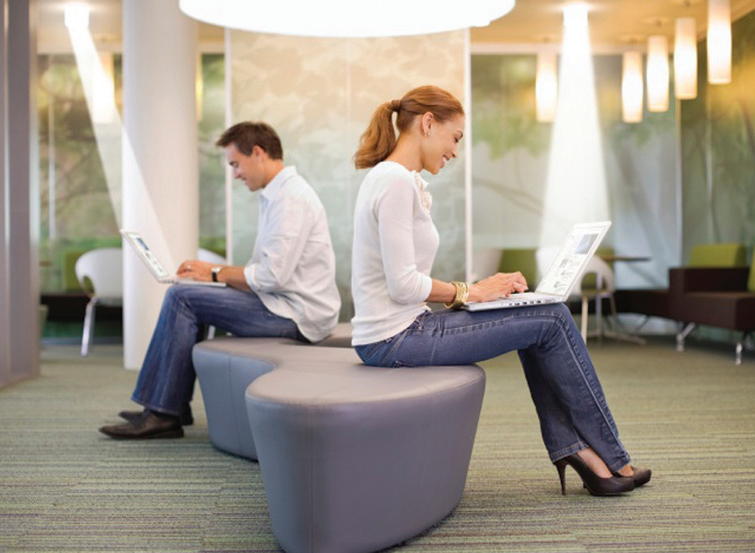 1) Visible light offers a lot of spectrum resources compared to traditional wireless communication, and the spectrum bandwidth is around 400 THz, which is a blank region to research.

2) Lighting, communication, and control placement are all functions of visible light communication. It's simple to integrate with current basic lighting systems and adheres to the country's energy-saving and emission-reduction goals.

4) The most significant benefit of visible light communication is its rapidity. In the future intelligent era, it will be an essential wireless communication technique for B5G/6G ultra-high-speed ubiquitous optical networking.

The design is more challenging, and the stability and practicability are poor.

The original binary signal is first transformed through encoding, modulation, and pre-equalization, and the resulting pre-processed signal is then converted to digital and used to control the light intensity of a light emitter (such as an LED), resulting in the conversion of electrical signals to optical signals. Additionally, after the light transmitter, an optical lens and a condenser cup can be added to improve the signal strength at the receiving end, hence expanding the transmission distance.

The modulated visible light signal travels through open space channels like the atmosphere or the ocean to reach the visible light signal receiver. Photodetectors such as the photodiode PIN and the avalanche photodiode APD are commonly used to detect optical impulses and convert them to electrical signals. The original transmission signal is restored after the received electrical signal has undergone digital signal processing such as post-equalization, demodulation, and decoding. 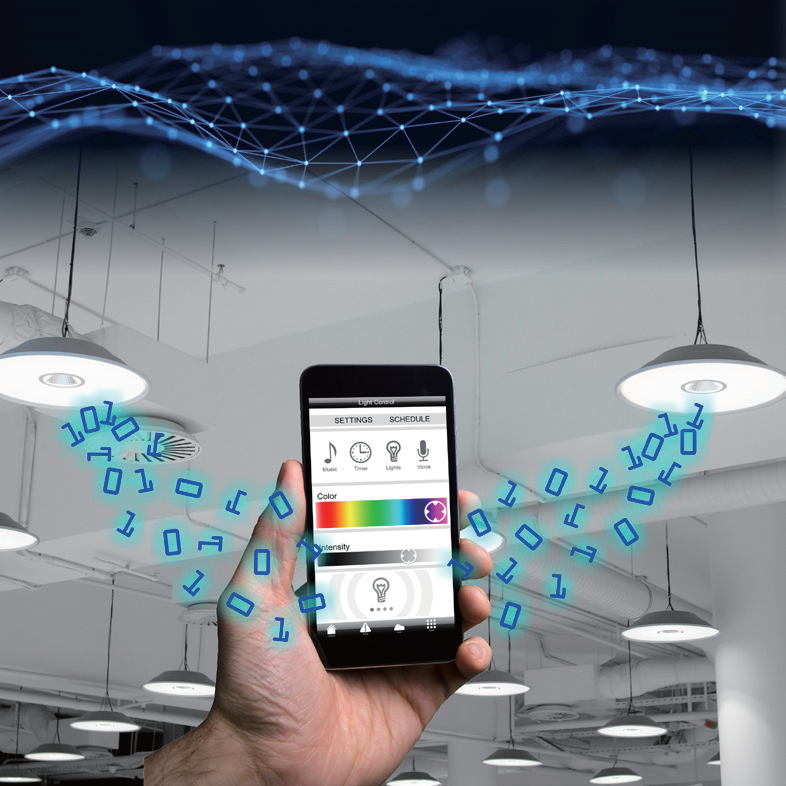 Many applications can benefit from the indoor placement. It can be used to steer automated guided vehicles (AGV) through factories and warehouses or to allow humans to navigate vast public structures like airports, hospitals, and stadiums in industrial applications.

Although the Global Location System (GPS) is extremely accurate for outdoor placement, it is ineffective for precise indoor positioning. Many structures make it harder for a signal to penetrate. Even if it gets through, the signal's multipath propagation as it bounces off walls and objects will severely limit its performance.

Indoor location accuracy of tens of centimeters can be achieved with VLC, easily outperforming RF-based methods. The light-based positioning system establishes a positioning system indoors by utilizing the current lighting system. Each LED ballast has a unique identifier that is embedded into the signal that drives the lamp, allowing the light to be varied while the identifier is transmitted continually.

These quick pulses are undetectable to humans due to the persistence of vision, but they may be captured and detected by equipment like smartphones. When the mobile phone is within range of several (3 or more) lamps, each of which has its own unique code, a simple triangulation method may be used to compute the distance between each lamp and then the position.

Energy efficiency and tiny size are two issues confronted by all VLC designers, including those with previous light design experience. ON Semiconductor delivers devices that improve the integration and performance of smart lighting systems, such as the VLC system mentioned in this article, to provide support to all designers. 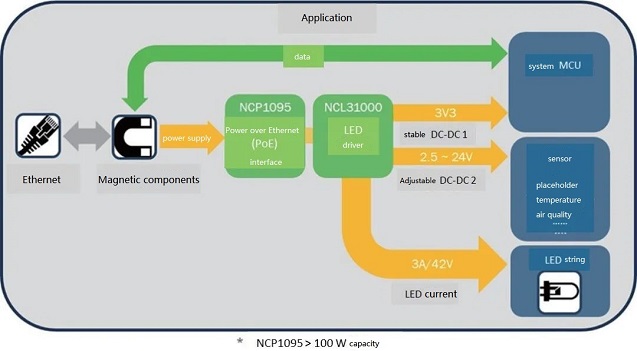 The NCL31000 LED driver from ON Semiconductor is intended primarily for LED-based lighting applications. It's a full-featured gadget that comes with everything you'll need to set up a high-efficiency LED lighting system. 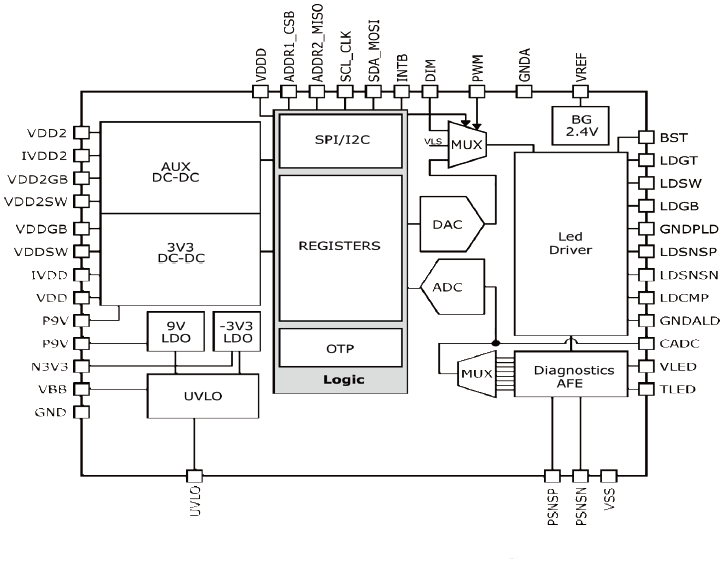 A high-efficiency (97%) step-down LED driver offers high-bandwidth analog dimming and PWM dimming to zero current at the heart of the system. The NCL31000 has an embedded 3V3 fixed DC-DC converter and an adjustable DC-DC (2V5>24 V) converter that can be used to power sensors or other system components, simplifying system design, lowering design risks, and increasing overall energy efficiency. The architecture of the NCL31000 provides exceptional EMI performance, outperforming the CISPR15/EN55015 criteria by >14dB. Precise linear dimming allows for visible light communication, allowing for the development of a light-based indoor location system that can also be lowered with 0.1 percent accuracy to prevent ghost lights from appearing at the lowest dimming setting.

An analog-to-digital converter (ADC) that tracks the system's current and voltage provides a comprehensive diagnostic approach. The input and output current and voltage are measured with high precision (less than 1%), allowing for improved power supply efficiency and LED load health monitoring. DC-DC converter and LED temperature are two diagnostic approaches. The I2C/SPI interface is used to send all data to the external MCU.

In multi-line lighting applications, the reduced version of NCL31000 (NCL31001) eliminates the requirement for DC-DC converters. It can be utilized as a low-cost alternative to the NCL31000 in several applications.

The first is that, as previously said, it can enable network routing in specific confidential locations.

In addition, visible light communication can provide network and location services in some big indoor or enclosed areas, such as shopping malls, hospitals, or huge enterprises, as well as underground mines and underground mines. The GPS signal will be quite weak in these locations, and the wireless network's quality will decline as well; nevertheless, these locations frequently need to turn on the lights for lengthy periods of time, so why not use these lights? The energy consumption of the LED will only increase by 30% after it is changed and the communication feature is introduced.

So, how does it function? The upper and below modules are LED lamps and laptops, respectively, as indicated in the diagram below, and their internal structures are identical. After the signal is OFDM coded and modulated, the LED lamp is controlled by the LED current driver, and then the visible light LED sends the visible light carrying the coded information, which is communicated by another lamp. It is received by the photodiode (photodiode as a photodetector). The signal is amplified by an amplifier before being sent into the OFDM receiver, which decodes it and sends it over Ethernet. In reverse transmission, the same is true. 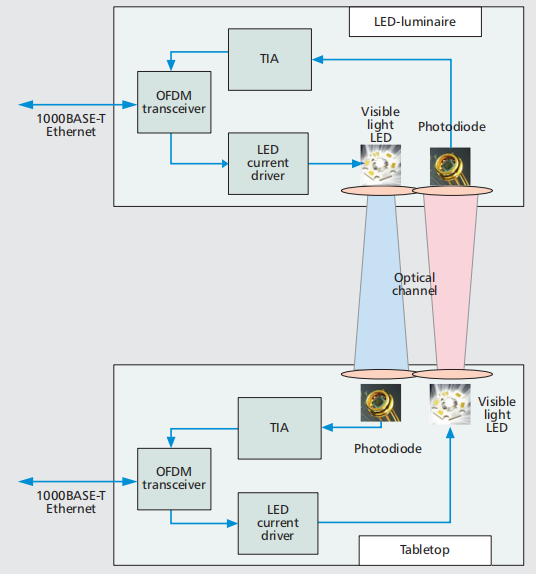 Smart-linked lighting, which is powered by low-energy LEDs, is a significant growth sector. Although long service life and low power consumption are the two main reasons for this achievement, current smart lighting's versatility is allowing for the development of new applications.

Although data transmission via light is not a new concept, it has now arrived and is gaining popularity because it is energy-efficient, stable, dependable, and safe, and it avoids many of the problems that RF does. As a result, more advanced applications, such as indoor positioning systems, become possible. Because they are based on light, they can be used in places where radio frequency is not permitted, such as hospitals and mines.

ON Semiconductor's NCL31000 advanced engine, in addition to a comprehensive portfolio of interconnected lighting solutions, opens up new and existing visible light communication markets for designers, providing energy-efficient and fully integrated solutions that help products enter the market faster. In addition to professional display backlighting, greenhouse multi-channel management lighting, and other indoor and outdoor networked lighting applications, the NCL31000 is an excellent solution.